Madhur madanantheswara Siddhi Vinayaka Temple is located 8 km north-east of Kasaragod town. The imposing structure of the temple rises majestically against the beautiful landscape of hills, paddy fields and gardens with the river Madhuvahini flowing leisurely in front of it. Lord madanantheswara or Shiva is the presiding deity. The Shivalingam of the temple is said to have been found by a   "low caste" lady "Madura" discovered an "Udbhava Murthy" (a statue that was not made by a human) of shiva linga  .The Ganapathy statue was drawn by a priest's son, a small brahmin boy, on the walls of the Garbhagriha(sanctum sanctorum) while playing. Day by day it became big and fat; so that the boy called Ganapathi as "boddajja" or "bodda ganesha" . Although Shiva is the presiding deity, Lord Ganapathy is more famous like in Kottarakkara temple and Vazhappally temple.This is one of the most famous Ganapathi temples of six ganpathi temples of ancients Tulunadu.

Devotees usually offer prayers to Mahaganapathi in the form of "Udayastamana". "Appa", Madhur's famous prasad, is a very tasty preparation. This is prepared daily and anyone offering prayers can avail these at the counters. Among the special poojas that are performed, "Sahasrappa" (Thousand appas) is very prominent. It consists of making an offering of thousand appas and then the devotees get to take home all these (and eat them with full relish). Another very special pooja that happens is Moodappam Seva which involves covering the Mahaganapathi statue withAppam. This is usually done on a community scale. Ganesh Chaturthi and Madhur Bedi are the occasions when the temple is at its busiest. 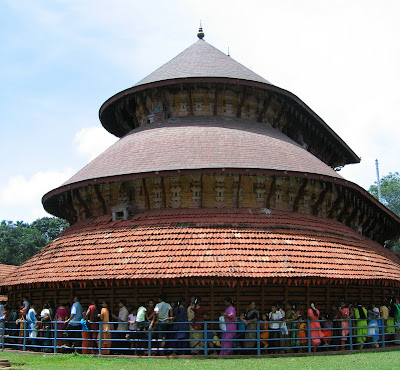 This temple has a huge three tired 'Gaja prishta' type sreekovil. Top two stories are copper covered.The temple is centuries old and todate is very well maintained. The ceiling of the Namaskara Mantapam of the Madhur Temple has been decorated with beautiful figures of puranic heroes in wood carving. A closer examination of the wood carvings would disclose the various episodes of the Ramayana, beginning with the Putrakame-shtiyagam and ending with Sitha Swayamvaram. The second and third storeys of the sreekovil are also profuse with attractive and exquisite wood carvings. The temple dwaja is also copper covered. The architecture of Madhur temple is unique.

In 1784 Tippu Sulthan attaked Kumbala border and entered to Madhur area,after drinking water from the well of the temple, he changed his mind on attacking and demolishing the Garbhagudi and marched towards Malabar. But to satisfy his soldiers and Islamic scholars he made a cut with his sword symobolising the attack. The mark is still visible on the building that is built around the temple well. 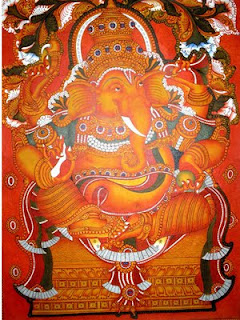